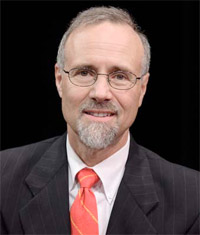 Tom’s research specialty is chemical/materials/laser/nanophysics, including nanomedicine.  He continues to be an active researcher with 800 papers, 8 authored and 18 edited books.  His awards include the Marlow Medal from the Royal Society of Chemistry (UK), Medal of Honor from Gulf University for Science and Technology in Kuwait, and Diploma of Honour from Seinájoki University of Applied Sciences in Finland.  He holds honorary doctorates from the University of Szeged in Hungary and Phranakhon Rajabhat University in Thailand, and he has been elected as a foreign member of the Korean Academy of Science and Technology.  As a hobby, he plays jazz keyboard and has performed throughout the St. Louis region and overseas in Bosnia, Croatia, China, Hungary, Kuwait, Oman, Romania and Russian Siberia.

Tom has been married since 1970 to Dr. Barbara Harbach, Curators’ Distinguished Professor Emerita of Music, former chair of the Department of Music, director of the School of Fine and Performing Arts, and director of Women in the Arts at the University of Missouri-St. Louis.  They are the proud owners (actually, servants) of four cats – two tortoise females (Luna and Stella) and two younger, mischievous males (Jeremiah and Jarrett).