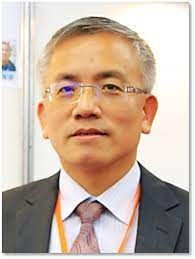 Hai-Han Lu received his Ph.D. degree from the Institute of Electro-Optical Engineering, National Central University, Taiwan, in 2000. He joined the Department of Electro-Optical Engineering, National Taipei University of Technology as an Associate Professor in 2001, as well was promoted to Professor and Distinguish Research Professor in 2003 and 2006, respectively. His research interests include radio-over-fiber (RoF) and fiber optics CATV transport systems. He has authored or coauthored more than 120 papers in SCI cited international journals and more than 60 papers in international conferences. Professor Lu is currently a Fellow of the IET, a Senior Member of the IEEE, a Member of the SPIE, and a Member of the OSA. He was a Membership Committee of the SPIE (2004-2005). He was awarded the ETRI Journal Paper of the Year (SCI, 2007), Outstanding Research Prize of NTUT (2004), and Outstanding Research Prize of EECS in NTUT (2007) for his significant technical contributions.

Radio over GI-POF Transport Systems: Lightwave transport systems have been developed with high expectations for future communications due to such advantages of optical fiber with low transmission loss, large bandwidth, and transparent characteristics for signal transmission. However, lightwave transport systems for very-short-reach (VSR) end user applications have not yet addressed. With the rapid development of information technology, the increasing demand for broadband services raises the needs for high bandwidth services, not only for the single-mode fiber (SMF)-based primary networks, but also for the plastic optical fiber (POF)-based in-house networks. Nevertheless, the in-house connection becomes a critical bottleneck to successfully transport high quality signals from the central office (CO) to the home. To overcome the challenge, a new kind of in-house network medium is required to replace the existed coaxial cable or twisted pair. Recently, graded-index POF (GI-POF) has been developed with better performance and lower cost. This flash product is the promising candidate to solve the last mile problem of fiber-to-the-home (FTTH). Clear advantages are offered by using the GI-POF for in-house networks: its large core diameter and small bending radius considerably eases coupling and splicing, as well as its ductility and flexibility simplifies installation in customer locations. As a result, a GI-POF network is an ideal medium to integrate backbone/access networks and in-house ones. In this report, an integration of FTTH and GI-POF in-house networks based on injection-locked vertical cavity surface emitting lasers (VCSELs) and direct-detection technique is proposed and demonstrated. In the proposed structure, RF signals are transmitted from the CO to the client premises, and then to the dedicated rooms. The proposed lecture employed two wavelengths for 5.8 and 10 GHz worldwide interoperability for microwave access (WiMAX) signals transmission. Improved performances of bit error rate (BER) over a combination of 20-km SMF and 50-m GI-POF transmission are obtained. Signal qualities meet the WiMAX demand with data signals of 20Mbps/5.8GHz and 70Mbps/10GHz, respectively. It verifies that GI-POF is a promising solution for in-house networks, in which providing low-cost and robust end user applications.

A Novel Hybrid Three-Band Transport System: With the ubiquitous popularity of handheld devices, the demands on wireless and wired-line capacity have grown rapidly. The next generation communication systems require large data rate and broadband services highly. Radio-over-fiber (RoF), fiber-to-the-X (FTTX), and fiber optical CATV systems are promising candidates to meet the demands in wireless and wire-lined optical access networks. RoF transport systems have the ability to offer significant mobility, economic advantage, and large capacity due to the characteristics of broad bandwidth and low transmission loss. FTTX networks have offers the last mile solution in optical access networks. In addition, fiber optical CATV systems are deployed widely to provide broad bandwidth to subscribers. A hybrid three-band transport system that uses different optical wavelength to deliver combined RoF RF/FTTX BB/CATV analog signals would be quite useful for a fiber networks providing telecommunication, Internet, and CATV services. In this lecture, a potentially cost-effective RoF/FTTX/CATV hybrid three-band transport system based on direct modulation of a DFB LD with multi-wavelength output characteristic is proposed and demonstrated Transmission performances over an 80-km single-mode fiber (SMF) transport were studied. With the help of direct-detection technique and optical single sideband (SSB) scheme at the receiving site, low bit error rate (BER) and clear eye diagram were achieved for ROF and FTTX applications; as well as good performances of carrier-to-noise ratio (CNR), composite second-order (CSO) and composite triple beat (CTB) were obtained for CATV signals.